the shade of the moon by Susan Beth Pfeffer 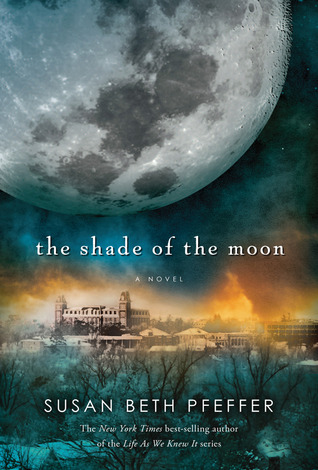 From Goodreads:
"The eagerly awaited addition to the series begun with the New York Times best-seller Life As We Knew It, in which a meteor knocks the moon off its orbit and the world changes forever.
It's been more than two years since Jon Evans and his family left Pennsylvania, hoping to find a safe place to live, yet Jon remains haunted by the deaths of those he loved. His prowess on a soccer field has guaranteed him a home in a well-protected enclave. But Jon is painfully aware that a missed goal, a careless word, even falling in love, can put his life and the lives of his mother, his sister Miranda, and her husband, Alex, in jeopardy. Can Jon risk doing what is right in a world gone so terribly wrong?"

My thoughts:
I read the first three books in this YA series right in a row.  I listened to the first one on audio and then borrowed the next two from the library.  This one I found at the Dollar Store so I grabbed it to have on hand, and then took almost a year to get to.  Once I got going I read it in a weekend.  I'm not sure what was stopping me from reading it.  Sometimes it feels like it needs to be the just the right time for a book.

Since it had been a little bit of time since the first three it wasn't all right at the top of my memory, but the author did a good job with adding in reminders without saying her is what happened which I appreciated.

In book one we met Miranda and her family and learned about the chaos that happened when a meteor hits the moon and moves it closer to earth.  In book two we meet Alex and his family in NYC and see what the events were like in a city versus a more rural area.  In book three the two groups meet and end up working to survive together.  Now we are at an enclave with an us versus them feel.  Those living in the enclave have purified air, schools, homes and servants, and plentiful food.  Those who live outside the enclave are the ones who work in the greenhouses and mines, they drive the buses and work as the domestic help to clean the homes, cook the food and take care of young children.  Jon, his stepmother Lisa and step brother Gabe are able to live within the enclave with the passes Alex and his sisters were given by a family friend.  Alex, ,Miranda and Laura (Miranda and Alex's mother) live in an unlocked apartment in town and work to earn their way.

A lot of parallels can be drawn about the way the clavers, those who have ids that allow them to live within the enclave walls and have fresh food and clean air, and the grub who are bussed in to do the menial work for the clavers.  The attitudes and treatment are something Jon hasn't really thought about much until a new doctor and his daughter Sarah move to the enclave.  Then he starts to see things with a fresh perspective that he isn't fully comfortable with.

When his sister Miranda has a baby even more questions are raised leading to some big decisions for all of the characters.  The authors note at the end had me wondering if there was a 5th book in the series, but her blog says she retired from writing in 2014 with this being the last book that she wrote, so I think it will be up to the reader to imagine how things will go for the characters who are part of the conclusion.

Here is the link to the author's blog about this being her final book:  http://susanbethpfeffer.blogspot.com/
Posted by Jill Buck at 4:42 PM

Labels: end of the world, YA