The Raindrop by Brian D. McClure 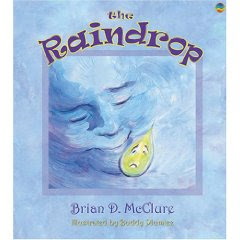 The Raindrop by Brian D. McClure
My thoughts:
This book is about the water cycle but it has taken out some of the science and made it more personal by following one raindrop on his journey. To make it even more interesting this raindrop starts the story thinking he is too small to be any good and that he will never amount to anything or matter to anyone. From the cloud, through the ground, into the underground water, up through a hose, into the ground, through a corn plant and then back into a cloud we follow the same drop. As he goes he learns that he matters and that we all matter. We are all part of the cycle and everything matters in the big picture. I liked this message because it shows children that even though they are small and still learning, they matter as we all matter, and the world would lose some of it’s brightness without them. Seeing the interconnectedness is a good lesson for children, and one that many adults have forgotten as well! Along with the oneness the author is focused on the science is all there as well, with the water cycle and the drop breaking up when used by the corn and put back together when the oxygen and two hydrogen meet back up in the cloud. I received this book from PUMP UP YOUR BOOK PROMOTION VIRTUAL BOOK TOURS for review purposes.

Though the uplifting rhymes and profound messages of acceptance, respect and understanding, author Brian D. McClure educates and entertains children, parents and grandparents in the adventurous journey of The Raindrop. In this story, The Raindrop experiences many emotions as it travels from feelings of uselessness to the discovery of its importance and Interdependence of all things big and small.
The Raindrop like the other seven books in The Brian D. McClure Children’s book series offer universal life lessons that empower and educate the whole family. Readers can purchase the book from http://www.amazon.com/Raindrop-Brian-McClure-Childrens-Collection/dp/1933426012

Ohio born native Brian McClure is the Founder and President of The Universal Flag and its affiliate companies. He is an author, human rights advocate and messenger of the oneness of all. Inside of the Universal Flag Companies, he set up a Non Profit Foundation to help relieve the suffering which he has witnessed in third world countries, along with spreading the Universal Flags throughout the World. The flag was recently paraded and flown at The United Nations as part of World Peace Day.

Brian has been interviewed on countless national radio shows and has been in a number of publications including CNN, CBS & NBC TV. He is the host the hit radio show, "A Call To Consciousness" – which is heard weekly on KTLK 1150AM in Los Angeles and KFNX 110AM in Phoenix Arizona.

He has spoken at many organizations, churches and institutions including The Agape Spiritual Center, The Inside Edge and The Onion based at the Unity Spiritual movement Center. Brian’s humanitarian efforts have extended worldwide. Recently Brian took it upon himself to visit and document impoverished communities in Sierra Leone which had just ended an 11 year war several years before, and Uganda. Upon his return he has been very proactive creating awareness about the real conditions which go largely unreported in the US.

Brian once stated: ''The power of a symbol cannot be underestimated. Politicians use symbols to gather and mobilize support. Corporations use logos to create effective, profitable brand loyalties. Now, the world has a new symbol, the Universal Flag is one that calls forth promise and potential for all. It defines our interconnectedness and oneness with ALL.” As Brian has said many times, “the Universal Flag Symbol acts as a signpost reminding us of our deepest truths. The symbol represents a world filled with infinite possibilities.”

Brian has developed an awareness of equality among all people and nationalities. His primary goal is to help people remember that inside each of us we hold the higher truths that are transforming our world.
You can visit Brian online at http://www.universalflag.com/ and www.briandmcclure.com/mediablog
Posted by Jill Buck at 8:31 PM