Train Wreck: The Life and Death of Anna Nicole Smith by Donna Hogan as told to Henrietta Tiefenthaler 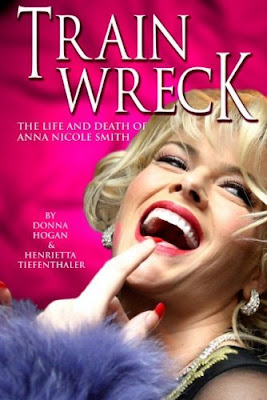 The sensational life story of one of America's most notorious celebrites - Anna Nicole Smith - told by the woman who knows her best - her sister. The childhood, the secrets and the details of her childhood, rise to fame, marriage to one of the richest men in America, court battles, the death of her son and her new baby.
My thoughts:
I found this book last year and it looked like a fun read, but it wasn't what I thought it would be. The book is written by Anna Nicole's half sister Donna who seems to have her own agenda. While it says it is a story about Anna Nicole at least a third of it is about Donna and her life. Donna tries to tie her life into Anna Nicole's but as a reader I really didn't care about how much harder Donna had it than Anna. Donna says over and over again that she doesn't want to have to speak to the press and described how she was hounded by the press for comments. She laments how when she did speak to the press it was twisted so that her words weren't what she had really said.
I realize that I don't have any experience with celebrities so maybe their family members truely are hounded and bothered, but it seems like she protests too much. Even the pictures in the book are only half of Anna Nicole with the rest being Donna and her other siblings. Do we really need a photo of Donna's children? How is that about her sister?
For some reason I felt the need to keep reading so the author succeeded in that. Every chapter I would consider putting the book down, but for some reason I kept going. I have to admit to never being much of a fan, which makes me wonder why I bought the book to begin with something about the catchy title maybe. I never saw the reality show Anna Nicole starred in but I did see her in magazines and on news segments. To have accomplished so many of her dreams shows that she couldn't have been as ditzy as the image she showed to the world. Her death is also a wake-up call to all of us that perscription drugs aren't safe and should be used with caution. I wonder how many non-celebrities have died because of drug interactions.
For someone actually interested in learning about Anna Nicole's life this may not be the right book, I think Donna is telling her version and there seems to be a lot of jealously and hurt with the truth. Perhaps she is dead on with her version, but I think someone else might be a more objective writer on the subject matter.
Posted by Jill Buck at 11:27 AM