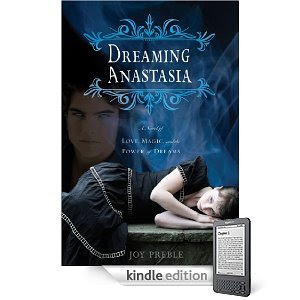 I don't know how long this promotion is going on but for today at least you can download Dreaming Anastisia for free on Amazon and Barnes and Noble. My kids and I were home from school today for a snow day and I received an email about this book. I downloaded if for some day when I had time and somehow managed to read the whole thing today (which is something I love about YA books, they read so fast)! I was intrigued because some of the books listed underneath it in the books other customers who bought this book also bought were ones that I had read and enjoyed or had thought about reading. I do not have an ereader yet, I do not doubt at some point I will, but for now I do not, so I read the book on my computer. Have to say it is not the most comfortable spot for reading which makes it even less clear why I read the whole thing today, but I just left it up on the screen and read a page or more each time I sat down and then finished it after the kids went to bed. I enjoyed it, although the reviewer from the School Library Journal doesn't sound too thrilled with it.

My thoughts on the book:
I enjoyed this book. I like flipping around from different genres and it was about time for another YA book and this area of paranormal was new to me. Anne (spelled correctly, the reviewer below either had a different text or just made a mistake) is a sixteen-year-old in Chicago who meets a mysterious newcomer that seems to herald the beginning of strange events. It reminded me a little of Becca Fitzpatrick's hush, hush even though there were no angels involved. The mysterious new guy at school, trusting easily even though events pointed to not trusting, the loquacious slightly to interested in guys friend, and her life being in danger.

Anne has dreams where she can see Anastasia from the Romanov family. She sees her as her family is killed, as Baba Yaga's large hands save her, and living in a hut with Baba Yaga. Ethan has magic and has been alive for decades but has not aged. Together they must figure out how to save Anatasia and avoid being killed. It had adventure, plot twists and good tension. It was definitely a fun rad for a snowy day.


School Library Journal Synopsis from Amazon.com:Grade 9 Up—This convoluted and contrived story shuttles between contemporary Chicago, Russia during the reign and downfall of the Romanovs, and the enchanted world of Baba Yaga. Ann, 17, who lives in Chicago, and Ethan, a handsome 18-year-old who mysteriously enters her world, share the narration. She is attracted by his beauty, and she soon develops strange magical powers. Ethan has powers as well; he can protect people and places. Readers eventually learn that he is actually a man who died in 1918 during the Russian Revolution. Ann begins to hear Anastasia's voice in her dreams and sees Baba Yaga and her frightening antics. Supposedly Ann is the one who can save Anastasia Romanov from Baba Yaga's clutches, where she has been since her family was brutally murdered by the revolutionaries, and Ethan has come to enlist her help. After a great deal of mystery about Ann's connection to the Romanov legacy, readers learn that she is the great-great granddaughter of Victor, Anastasia's illegitimate brother who has also survived since 1918. He is trying to stop Ann and Ethan from rescuing Anastasia; if she is found, Ethan and Victor will become mortal and die. In spite of the confusing back and forth, persevering readers might forge ahead to see how the story concludes, but it is a difficult read. Also, the contemporary scenes between Ann and her friend Tess contrast sharply with the book's main focus, and Tess's bitterness over the loss of her virginity awkwardly intrudes on the main plot.
Posted by Jill Buck at 9:41 PM