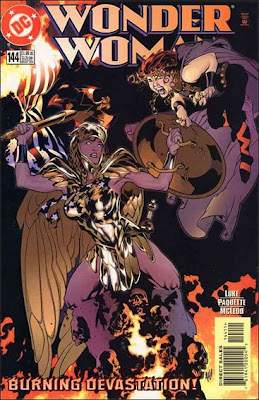 This weekend we took our children to a local comic book store. Comics were something I never really got into when I was younger. No special reason, I guess I was just more interested in books. When I was in first or second grade I recall getting two Wonder Woman comics for my birthday and I had them for years. I think they may still be around somewhere. Anyway, the store had a fifty cent bin and I flipped through to see if anything caught my eye and I ended up picking out two for myself. This was one of them.

While the title on the front doesn't list it as part two of Devastation the first page of the comic says it is part two. I figured it shouldn't really matter since I would think a comic should be able to stand alone just as a book in a series is able to stand alone. What i didn't care for was the way it kept referring with an asterisk to a different issue or the prior issue, as in "*See issue #139". I guess it is a way to try to make sure that readers buy all the issues but for someone who decided to start collecting now I think it might be overwhelming to feel like you needed to go back and buy all the back issues which are then more expensive because they are no longer the current issue.

What I did like about the story was the use of Greek mythology, which I don't remember from when I was in elementary school. Since I recently worked through the Percy Jackson series with my children it was fun for us to encounter Chiron and the Oracle and to find out that Wonder Woman was gifted her powers from different gods. She has the power of earth from Demeter, wisdom from Athena and flight from Hermes. I wonder if these comics might help students learning Greek mythology cement the gods a little bit better.
I don't know if I will become a comic book collector of any kind. Even the new cover price of $2.99 seems like a lot for an issue that can be read in five to ten minutes. I can see how this could get to be an expensive hobby.
Posted by Jill Buck at 1:47 PM