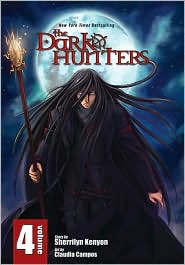 
In the war against vampires, mankind has only one hope: The Dark-Hunters. Ancient warriors who died of brutal betrayal, the Dark-Hunters have sworn themselves into the service of the goddess Artemis to protect us.

It's a pact with pretty good perks. Immortality, power, psychic abilities, wealth and a cool wardrobe. But it comes with a few drawbacks: fatal sun poisoning and a new, irreparable dental problem. But aside from the fangs and nocturnal lifestyle, it's not so bad.

In this volume, the adventure continues with Talon and Sunshine as they face off against the Greek and Celtic gods bent on making a major comeback.

My thoughts:
Talon and Sunshine are two of my favorite characters from this series.  I think I like the beginning characters more than some of the later one because the series was still fresh then.  While I still enjoy reading each installment, there are now so many characters to keep track of that I feel like I start to forget who is who.  I need one of the cheater family tree diagrams like Christine Feehan uses in her Carpathian series!

Sunshine is such a pure and good character.  With her love of art and the way she looks for the best in people.  It is easy to see why Talon feels so strongly for her.  I loved seeing her grandmother and finding out the twists of fate that are woven into the fabric of their lives.  This was also the first book that gave a glimpse into Archeron's true character and his past.  I had forgotten how selfish and spiteful Styxx was in the beginning.

Seeing this story played out in manga fashion was fun.  The four volumes of the Dark Hunter series are the only  manga books I've read, but I really can see the appeal.  Because the pages do not have page numbers on them I have a hard time finding a good place to stop.  I always seem to think I'll just read one more page and before I know it I've stayed up too late and finished the book!  Since this one just came out this month I suppose it will be a bit before another volume is released.  I am a bit sorry I gave away the first volume because these are ones I now think I will be keeping on my shelves.