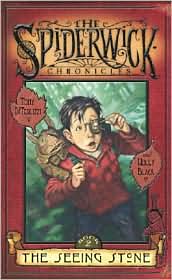 Synopsis
we said no
still you looked
now instead
someone gets cooked
My thoughts:
In this installment Jared finds out more about the creatures that share our world.  Thimbletack warns him that since he didn't heed the warning to get rid of the book he has set something in motion.  The Simon is taken by by goblins.  In order to see the goblins and other fairy creatures there are a number of things that can be done, one is to look through a stone with a hole in the middle.  When Jared finds one Thimbletack tries to stop him from taking it, in the ensuing struggle Jared manages to once again anger the brownie/boggart.

In this book all three of the Grace children meet a troll, goblins, a hobgoblin and a griffin.  Jared also sees some other creatures in the woods.  When Simon is kidnapped, Jared and Mallory have to rescue him.

The children start to show what they are made of in this book.  Book one set up who the characters were and why they had come to live in this house in the woods (their parents are either separated or going through a divorce.  Jared had started acting out and getting into trouble at school and it is also possible that money was an issue with living in the city).  Now they are adjusting to going to a new school as well as the new reality of there being creatures that they cannot see who are sharing their world.

In this book their mother does not make much of an appearance.  We see her at the end when the children return to the house very late after their adventures rescuing not only Simon, but also a griffin, from the goblins.  When their story about why they are late falls flat they are grounded for the rest of the month.

One of the big differences between the book and movie at this point is the griffin.  I know the griffin comes to play in the rest of these books, but there was no griffin that I can remember in the movie.