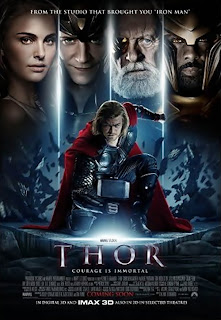 The powerful but arrogant warrior Thor is cast out of the fantastic realm of Asgard and sent to live amongst humans on Earth, where he soon becomes one of their finest defenders.

My thoughts:
This is the type of movie I always associate with summer.  At the beginning of May there often seems to be a big action film released which coincides with my husband's birthday.  This time we got to see Thor not only in 3D by in IMAX 3D.  I haven't seen an IMAX movie in ten years or more and I think I had forgotten just how big the screen would be!

I enjoyed this story.  I thought Chris Hemsworth did a very good job with the character of Thor.  His arrogance was spot on.  Seeing his face when he is cast out of Asgard showed all the shock he felt at the consequence for having disobeyed his father the king.  Sometimes in action movies, and especially ones with Superheros or Comic book characters, the actors seem almost wooden in their roles, but here that was not the case at all.

Some of the aerial shots of landscapes, when the camera panned over something and then went lower almost felt like being on a roller coaster.  A few times I felt like I was losing my stomach or even felt a bit dizzy.  The scenes where Thor was flying with his hammer at times reminded me of the old Superman movies with Christopher Reeves, but I guess it is hard to make flying like that unique.

The interaction between Thor and Natalie Portman's character felt underdeveloped.  Yes, it was easy to see that she found him very attractive and had a bit of a crush, but he didn't really seem to reciprocate those feelings.  He even seemed like he had missed that she might feel anything towards him.  Then all of a sudden they share the kiss seen in the previews and it is assumed that they were in love.  That I didn't buy.

Watching Thor come to terms with having been cast out and had his powers revoked felt real.  Seeing him lose some of his arrogance and become more human and sympathetic made him more likable and in turn, made the movie more powerful.  It will be interesting to see what his role is like in the upcoming movie that will be bringing so many of the comic characters together.