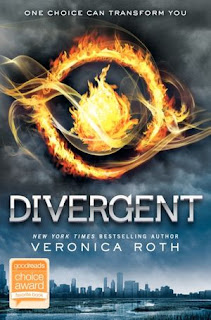 In Beatrice Prior's dystopian Chicago world, society is divided into five factions, each dedicated to the cultivation of a particular virtue—Candor (the honest), Abnegation (the selfless), Dauntless (the brave), Amity (the peaceful), and Erudite (the intelligent). On an appointed day of every year, all sixteen-year-olds must select the faction to which they will devote the rest of their lives. For Beatrice, the decision is between staying with her family and being who she really is—she can't have both. So she makes a choice that surprises everyone, including herself.
During the highly competitive initiation that follows, Beatrice renames herself Tris and struggles alongside her fellow initiates to live out the choice they have made. Together they must undergo extreme physical tests of endurance and intense psychological simulations, some with devastating consequences. As initiation transforms them all, Tris must determine who her friends really are—and where, exactly, a romance with a sometimes fascinating, sometimes exasperating boy fits into the life she's chosen. But Tris also has a secret, one she's kept hidden from everyone because she's been warned it can mean death. And as she discovers unrest and growing conflict that threaten to unravel her seemingly perfect society, she also learns that her secret might help her save those she loves . . . or it might destroy her.
Veronica Roth is the New York Times bestselling author of Divergent, the first in a trilogy of dystopian thrillers filled with electrifying decisions, heartbreaking betrayals, stunning consequences, and unexpected romance.
My thoughts:
I knew I wanted to read this book for some time now, but I have so many books around to read that I put off buying it.  I even had it in my hands at Barnes and Noble a couple months ago, and put it down to wait on.  Last week I had a bookfair at Barnes and Noble and planned to use a gift card from Christmas to buy the book and I could not find it on the shelf.  I decided to get a preview of it on my Kindle and then, once I had started it, I had to buy it to finish it.  I loved it!  It is the book I have enjoyed the most lately and, even though I finished reading it a few days ago, I still can't stop thinking about it.

There are five factions in this world who have devoted themselves to one positive aspect of human nature.  They live in segregated groups, but go to school together up until the given day when all sixteen year olds must make their decision as to where they will live as adults.  They can stay with their family's current faction or change, but changing means they are cut off from their family for good.  Prior to making this decision each student undergoes a test administered by someone from a different faction to see which faction they have the aptitude to belong to.

I stayed up way too late to finish this book the other night, I had to see what was going to happen and I was a bit worried about one of the characters.  Thinking back to how I couldn't stop thinking about this book I can't figure out why I don't have more to say about it.  Beatrice has grown up in Abnegation, the faction the values selflessness.  They dress in grey, their homes are made of cinder blocks and most of what they have is the same.  They are this way so they can forget themselves and do what is best for all and it makes them almost invisible to the other students at school, except for recently when they have been bullied and accused of hording fresh fruit and supplies.  Every morning Beatrice watches the Dauntless students arrive by jumping off of a moving train.  She is pushed around by the Erudite's who call her a "Stiff" and invisible to the students from Amity.

Beatrice, or Tris as she comes to be known after the Choosing Ceremony, is a small for her age sixteen year old, but she makes a tough decision and stays her course to succeed in her chosen faction.  Bullies abound and tough feats are attempted and accomplished.  I think this book lives up to it's hype as similar to the Hunger Games.  I can't wait for book two to come out at the beginning of May!