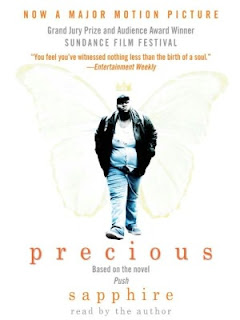 An electrifying first novel that shocks by its language, its circumstances, and its brutal honesty, Push recounts a young black street-girl's horrendous and redemptive journey through a Harlem inferno. For Precious Jones, 16 and pregnant with her father's child, miraculous hope appears and the world begins to open up for her when a courageous, determined teacher bullies, cajoles, and inspires her to learn to read, to define her own feelings and set them down in a diary.
My thoughts:
I checked this out as a digital audio book and for some reason I thought it was non-fiction, so listening to it I kept thinking that I could not imagine having the life that Clarice Precious Jones has and wondering if she was even still alive. Since our library only has 73 digital audio books I usually just search them all for one that is available since most of them are already checked out at any given time. Had I searched by category I would have known that this one was fiction. It gave me a whole different experience with the story though because I was treating it as if it were all true. I think that made me sadder than if I had known this was a fictional account. It made me more mad and sad all at once and sickened by what she was going through.

It is hard to imagine getting through life being illiterate, but on a regular basis there are stories in newspapers, magazine, online and in books of people who have made it through the educational system unable to read or have missed out on having the chance to get an education. Just this week in People Magazine there is a story of a man who didn't learn to read until he was in his 90's and then he wrote a book. Being able to read is something as adults that we take for granted, but so many children struggle and if the resources and teachers needed are not there or are stretched too thin, they can fall through the cracks. Precious has made it to the age of 16 unable to read and is pregnant for the second time with her father's child. Her mother lives on welfare and does not leave the house and the first child was born with Downs Syndrome and lives with the great grandmother. This whole way of life is so different than many of us have ever imagined. Having this book as audio gave it another layer of experience because instead of having to imagine the dialect and speech choices from the written word, I was able to listen to it narrated in just that way. It made Precious more real somehow. I am not sure that I want to see the movie now after having read the book. I don't think I want to see this acted out on screen.