Her Amish Man by Erin Bates 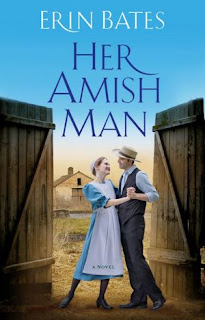 FAITH, HOPE, AND LOVE
A touching novel set in the heart of the beautiful Amish country. . . .
HER AMISH MAN
Because Leah McKenzie’s mother was “shunned” for marrying an outsider, Leah has never known her Amish relatives. Then she is framed for a murder she didn’t commit, and she needs somewhere to hide until she can clear her name. Confident no one would think to search for her in an Amish community, she heads for her grandmother’s home in Illinois. A safe haven is all Leah is looking for, but she soon finds herself entranced by the simplicity of the old-fashioned lifestyle. What she doesn’t expect is to find a man there who stirs her heart.
When John Miller left his Amish village to attend college and join the military, he never thought he’d return. After the horrors he witnessed in war, however, he longed for a tranquillity he knew that he could find only among his own people. Working as a craftsman, making beautiful furniture, John has found in the soft warmth of the wood the peace he feared might be lost forever. But his world is soon turned upside down when he falls for the “English” woman who has come to be reunited with her kinsfolk. When danger follows Leah, John must not only protect her but decide if her love is worth the risk of being “banned” forever.
My thoughts:
Earlier this summer I found this book was sent to me by the publisher.  It looked interesting but i didn't start it right away.  When the same book arrived again a few weeks later also from the publisher I decided it was a sign that I should read the book.  I didn't love the cover art, but the story itself was a lot of fun to read.

Leah is a lawyer at a law firm in St. Louis.  When the senior partner she has considered her mentor and friend is killed in front of her she is thrown for a loop.  Then she finds herself becoming the wanted suspect for his murder.  She decides to go to see her maternal grandmother, who is Amish.  They have never met because her mother was shunned for leaving the Amish to marry and missed her family terribly until her recent death.  On her way to the settlement Leah is in an accident and ends up meeting the Miller family who agree to rent her a room in their home.  Leah learns about the Amish while working with them side by side in their home and on their farm while she is staying with them and trying to build a relationship with her grandmother.  At the same time she is getting to know the Miller's better, especially John.

John has his own invisible scars from his time in the military fighting in the desert.  He came home to feel whole and heal his soul, but isn't quite the same man he was when he left.  He agrees to help Leah get to know her grandmother and to learn more about the Amish way of life but they get even closer than either one of them bargained for.

Leah knows that eventually she is going to have to deal with the false charges against her but her time away from all she knows is comforting and helps fill in some of the gaps she felt in childhood when her mother acted a certain way or said certain things.

I really enjoyed this book and I am glad it ended up on my doorstep!