The Girl Who Played With Fire by Stieg Larsson (audio) 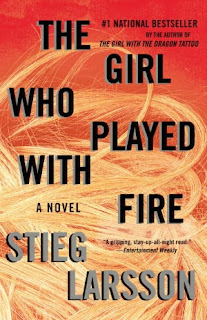 Mikael Blomkvist, crusading publisher of the magazine Millennium, has decided to run a story that will expose an extensive sex trafficking operation. On the eve of its publication, the two reporters responsible for the article are murdered, and the fingerprints found on the murder weapon belong to his friend, the troubled genius hacker Lisbeth Salander. Blomkvist, convinced of Salander’s innocence, plunges into an investigation. Meanwhile, Salander herself is drawn into a murderous game of cat and mouse, which forces her to face her dark past.

My thoughts:
I listened to this book on audio, but since I have already seen the foreign movie version nothing was a big surprise.  It was nice to fill in a bit more of what was going on with Lisbeth when she had scenes with a very stony look on her face.  In the movie I wondered what she thinking and why she was just sitting there in her apartment.

I wonder what this would have been like if I hadn't already known what the dark secret Lisbeth had in her past and how she had been drawn into the game at least partially.  I don't know if quite all the past connections were explored in the movie as it has been a few years since I watched it, but I understood a lot more of the inner workings and how things had gotten to the point that they had.

I enjoyed this on audio, but I am not sure if I would have stuck with it if I had been reading it in book form.  I never got to the point where I was too invested in it or too worried about how it was going to turn out.  This is part of the reason behind my rule, that my children are very familiar with, that I read the book before seeing the movie.  If I see the movie first I am much less likely to ever read the book.