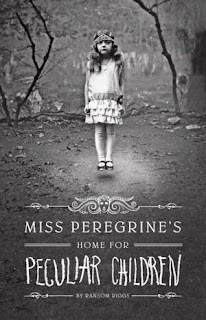 A mysterious island.
An abandoned orphanage.
A strange collection of very curious photographs.
It all waits to be discovered in Miss Peregrine’s Home for Peculiar Children, an unforgettable novel that mixes fiction and in a thrilling reading experience. As our story opens, a horrific family tragedy sets sixteen-year-old Jacob journeying to a remote island off the coast of Wales, where he discovers the crumbling ruins of Miss Peregrine’s Home for Peculiar Children. As Jacob explores its abandoned bedrooms and hallways, it becomes clear that the children were more than just peculiar. They may have been dangerous. They may have been quarantined on a deserted island for good reason. And somehow—impossible though it seems—they may still be alive.
A spine-tingling fantasy illustrated with haunting vintage photography, Miss Peregrine’s Home for Peculiar Children will delight adults, teens, and anyone who relishes an adventure in the shadows.

My thoughts:
I bought this book for my Kindle, but kept putting off reading it so I borrowed the audio version from the library.  I alternated between the two versions, sometimes listening and sometimes reading.  Even though the audio version came with the photographs that are sprinkled throughout the book, I think they worked better on the page as you came to each at the appropriate time in the story.  I debated letting my children read or listen to this one, but decided some of the references the relationships between men and women seemed to be more than what I feel they are ready for.  I checked the recommended age for the book and it is older than they are, I do believe when they are older this is one that they will enjoy!

Jacob has been seeing things his whole life that everyone tells him are all in his mind.  He has been working with a therapist because of how strongly he has always believed his grandfather's stories.  Then a tragedy unfolds and he ends up going to Wales to see where his grandfather lived during the war in an orphanage on an island.  The problem is the orphanage is a ruin, but somehow when he is there he feels like there more to everything than what meets the eye.  He can hear them when no one should be there.  He finds the secret to the past which opens up a lot more questions about the future.  Jacob finds out the truth about his grandfather, himself and a part of the world he was always told did not exist.  The way the book ended was a bit open ended which made me wonder if there is supposed to be a sequel or if this book is intended to be a part of a fantasy series.

I loved the way the author used photos he found at flea markets and similar places to come up with back stories about the characters and to lend an authenticity to these children who have such unusual talents.

Ransom Riggs grew up in Florida but now makes his home in the land of peculiar children—Los Angeles. Along the way he earned degrees from Kenyon College and the University of Southern California’s School of Cinema-Television, got married, and made some award-winning short films. He moonlights as a blogger and travel writer, and his series of travel essays, Strange Geographies, can be found at mentalfloss.com or via ransomriggs.com. This is his first novel.
Posted by Jill Buck at 7:00 AM