"The Mudhogs" by Dalton James 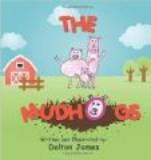 My rating 4 out of 5
How this book came to me: Received from Bostick Communications for review purposes

Oak Ridge, TN - Dec 14, 2009 - Dalton James is on a roll. Outskirts Press today announced publication of The Mudhogs, the third book Dalton has written and illustrated.

It is remarkable enough that anyone has three books to his credit, but even more remarkable in Dalton's case. He is eight years old.

The Mudhogs is the third book Dalton has written and is unrelated to his series of imaginary adventures with his dad, The Sneakiest Pirates and The Heroes of Googley Woogley, both of which have received excellent reviews. Dalton has a knack for matching the imaginative reality of his peers in his clever stories, and any or all of his books are perfect gifts for a book happy eight year old to enjoy.

The Mudhogs is about Dalton's favorite animals, pigs. Narrated by a tick named Fangs, who lives on one of the pigs, the book tells the story of a group of three friendly pigs who love to play in the mud, but one day find their mud has disappeared because of a recent lack of rain. The three friends try everything they can to make it rain, but they have no luck and so embark on an even greater adventure to different cities, states and countries to try put some mud back in their home yard.

Although ultimately unsuccessful in their search, the three arrive back home and are surprised to find everything they were looking for and in doing so, they learn a valuable lesson.

Dalton James is the quintessential young author and loves to give talks about writing to other third graders in local schools. He particularly appreciates it when he is paid in chocolate chip cookies.


About the author:
Dalton is currently in the third grade and is illustrating his third book in his imaginative adventure series with his dad, Super Pete Saves the Day, while writing another book on pigs, Snouter Pig, and brainstorming the second book in his mudhog series. Dalton has a large collection of stuffed pigs of all shapes and sizes as well as his own small library of books about pigs.

He holds a second degree black belt in Tae Kwon Do and likes to practice and enter tournaments. He also plays basketball, baseball and runs five kilometer races. Dalton wants to be a fireman, a policeman, a detective, a doctor or a writer when he grows up; depending on the day you talk to him.

My thoughts:
This book showed imagination and attention to detail. I liked the repetitiveness of some of the passages because it made it easier for my first grader to read on his own. It made all three of my older children laugh. What was particularly special to me was that I got to share a book written by a child author who was not too much older than my own children. Many times kids think things like writing a book are just for adults, so to be able to show a finished product written and published by a child was great. I am considering donating this book to my son's classroom for his teacher to use to motivate her students. I plan to keep it for a bit because my three year old especially has latched onto it, but I would love to see it shared with an even wider audience. The illustrations look like they may have been created with a computer. I hope it inspires my children to think about writing more.
Posted by Jill Buck at 10:46 AM