Soul Surfer: A True Story of Faith, Family, and Fighting to Get Back on the Boardby Bethany Hamilton , Rick Bundschuh , with Sheryl Berk 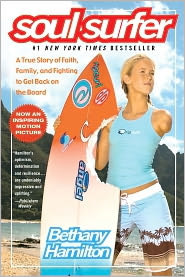 Overview:
When Bethany Hamilton lost her arm in the fall of 2003 to a shark attack, it looked as if the career of one of the country's top amateur surfers was over. But just ten weeks later, she returned to competition in her native Hawaii, vowing never to give up the sport she loves. She has since earned an indelible place in America's heart by making appearances on 20/20, Good Morning America, The Tonight Show with Jay Leno, and a host of other venues. Now, in Soul Surfer, this extraordinary fourteen-year-old recounts her incredible, harrowing story in her own unforgettable voice.


Bethany has already lived more than a lifetime's worth of triumph and tragedy, and she shares every poignant moment in these pages. Readers learn how she rose once again to the challenges of competition after a life-changing event, how she dealt with the maelstrom of media attention, and how she relied on her faith and innate positive thinking to embrace changes that would undo most people. Written with passion and insight, and filled with thrilling moments of the sport Bethany has come to personify, this is a portrait of American heroism that will captivate readers of all ages.

My thoughts:
On Monday when I was returning books to the library I saw this one on a table of required reading for high school students.  My children aren't in high school yet, but my understanding is that our district requires them to read a given number of books during the summer.  They can chose from different topic areas and have to read at least one fiction and one non-fiction book to fulfill the requirement.  Each grade level has different choices and each title the student picks has to be from the same topic area.  This book is listed as a choice for incoming ninth graders in the sports non-fiction category.  I figured once summer started the books on the list would be impossible to find on the shelf so I decided to read it now.

I saw a number of commercials for the movie that was out recently with the same title, but hadn't realized it was based on a book.  I seem to be on a bit of a non-fiction kick lately so this jumped out at me.  I liked the writing style.  Bethany wrote by talking to her friend and pastor Rick Bundschuh and then he took the transcriptions of their talks and helped her form it into a book.  perhaps because of the way it was written it has a very conversational tone, as if she is sitting down with you and telling her own story in her own words without dressing it up or trying to sound pretentious.  I thought there would be more dealing with how she learned to surf again after losing her arm, but the part when she started surfing again was just a few pages.  Not that she downplayed how it was difficult to master without the arm, but she was able to get back up on her board in small waves by the end of her first time back out in the water.  Not the first or even second time she tried, but before she called it a day she was surfing again.

When I read the subtitle I thought the book was going to be about Bethany having faith in herself that she was still the same person and that she could still do almost everything she could before, but the faith component is about her faith in God and her desire to share that faith with others through the celebrity she has developed since the attack.  I admire her message, but had been hoping for more personal passages.  More back story about surfing and her family.

It will be interesting to see the movie now that I have read the book.  Many times I am disappointed in the adaptations of books to film.  Since this is a book based on actual events things might be different, plus there really isn't a lot of action in the book aside from the shark attack so the movie must also be based simply on Bethany's life before and after the attack.
Details
•Pub. Date: June 2006