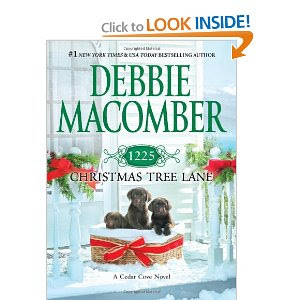 Overview from Amazon.com:
The people of Cedar Cove know how to celebrate Christmas. Like Grace and Olivia and everyone else, Beth Morehouse expects this Christmas to be one of her best. Her small Christmas-tree farm is prospering, her daughters and her dogs are happy and well, and her new relationship with local vet Ted Reynolds is showing plenty of romantic promise.


But…someone recently left a basket filled with puppies on her doorstep, puppies she's determined to place in good homes. That's complication number one. And number two is that her daughters Bailey and Sophie have invited their dad, Beth's ex-husband, Kent, to Cedar Cove for Christmas. The girls have visions of a mom-and-dad reunion dancing in their heads.

As always in life—and in Cedar Cove—there are surprises, too. More than one family's going to have a puppy under the tree. More than one scheme will go awry. And more than one romance will have a happy ending!

My thoughts:
I love Debbie Macomber's Christmas themed books and over the years I have really enjoyed her Cedar Cove series.  I was a little sad when she announced that this would be the last book in the Cedar Cove series but it was a really good send off of the series.  I still haven't gotten around to reading the last two books prior to this one, I have one on my shelf and one is on it's way to me from paperbackswap.com so I am  going to have to catch up on them at some point.  Each Cedar Cove book is set at a different character's house.  That person, couple or family end up being the focus of the story, but all the other characters made an appearance as well.  This time, since it was the last book, each of the homes that had a book named after them got at least a chapter to catch up with where they are now and how their lives are going.  It was nice to stop into each home and see how they were getting ready for the holiday, who was getting engaged, getting a new puppy, being thankful for second chances and so on.

Beth and Kent Moorehouse were new to me, Beth must have come to Cedar Cove in one of the last two books that I haven't read yet, but I loved the idea of owning  a Christmas tree farm and working to rescue dogs and train them to work with children and senior citizens.  Beth and her husband divorced three years ago after growing apart, no one thing led to the divorce, just the accumulation of life stresses, resentments and such over the course of a twenty-three year marriage.  Beth moved to Cedar Cove to start a new life.  This year their two college age daughters decide it is time for their parents to stop being silly and to see that they still love each other.  Of course their are obstacles in this, but  it was  all well done.  I checked this book out of the library on Friday and today, while my children were playing with their new toys, videos games and watching a movie I sat with them and read.  It was a very relaxing way to spend the morning and the perfect story to do it with!  I noticed that as today's Amazon Kindle Deal of the Day they are offering five older Christmas themed romances, one of which is an older Debbie Macomber, Call Me Mrs. Miracle.  This is the one that was made into a Hallmark movie last Christmas.  If you are looking for a read for the season today check it out!