The Hollows: New Fiction, Facts, Maps, Murders, and More in the World of Rachel Morgan by Kim Harrison 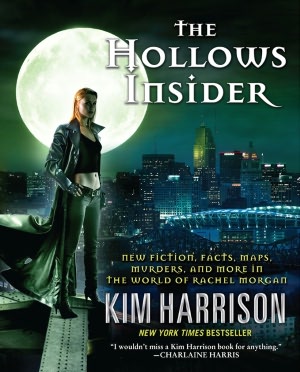 In the Hollows, the supernatural Inderlanders rule, and humanity must abide by their conventions, or else.

To survive among vampires, witches, Weres, gargoyles, trolls, fairies, and banshees—to say nothing of demons—humanity needs a guide. And now, written by Kim Harrison herself, here is an insider’s look at the supernatural world of the Hollows, from an overarching new story to character profiles, maps, spell guides, charm recipes, secret correspondence from the elusive Trent Kalamack, and much more.

My thoughts:
This was a really interesting compilation of different things that creates a background and a frame for the books in the Rachel Morgan series.  It is written as if a reporter from the paper is looking into Rachel after a spell on a bus accidentally leaves him bald.  Parts of it are his journal entries, others are pages from the newspaper, files from both the FIB and I.S., recipe books, spell books, notes, memos between different characters and more.  The parts I enjoyed the most were Devon Crossman's journal entries and how his need to get to the bottom of things and past the cover-ups he perceived were a part of both the government and the law enforcement agencies was frustrating him.  The reader is able to watch his articles as they are censored and his hard drive wiped out.  It also reveals some behind the scenes actions by different characters that I either have already forgotten about or that were not revealed before now.  It is a very heavy book weight wise.  My complaint is that it was hard to hold as bedtime reading, it feels like a textbook.  Some of the sections were a bit dry too as they were written to be like pages from a manual or textbook, so they were this way on purpose, but some of the pages lost my interest and I skipped them like the recipes and some of the spells.  If you have read the series and want more on Rachel I would recommend this.  It starts at the beginning of the series and goes through the last book I read, so it covers a good deal of time and investigative work by the imaginary reporter.  Also some of the photos were sent in by readers, I recall Kim Harrison doing contests on her web site for readers to send in photos that would fit into different categories and some of those were selected to be a part of the book.  This was one of my birthday books in October; it just took me a while to get around to reading all of it.