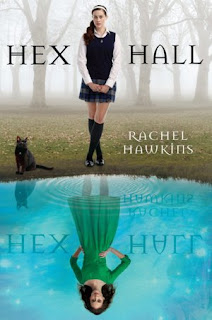 Three years ago, Sophie Mercer discovered that she was a witch. It's gotten her into a few scrapes. Her non-gifted mother has been as supportive as possible, consulting Sophie's estranged father-an elusive European warlock-only when necessary. But when Sophie attracts too much human attention for a prom-night spell gone horribly wrong, it's her dad who decides her punishment: exile to Hex Hall, an isolated reform school for wayward Prodigium, a.k.a. witches, faeries, and shapeshifters.

By the end of her first day among fellow freak-teens, Sophie has quite a scorecard: three powerful enemies who look like supermodels, a futile crush on a gorgeous warlock, a creepy tagalong ghost, and a new roommate who happens to be the most hated person and only vampire on campus. Worse, Sophie soon learns that a mysterious predator has been attacking students, and her only friend is the number-one suspect.

As a series of blood-curdling mysteries starts to converge, Sophie prepares for the biggest threat of all: an ancient secret society determined to destroy all Prodigium, especially her.
My thoughts:
This was on my TBR list for awhile and I had it on my wishlist on paperbackswap.com.  I had my turn a couple weeks ago.  This was a really enjoyable read.  I actually have book two waiting on my Kindle now as a Mother's Day gift.  It is waiting until I finish a few of my current reads so I can get it started.

I liked Sophie and the magical world she lives in.  She reminded me a bit of Rachel Morgan in Kim Harrison's series.  A witch who gets into trouble with her powers even when she is trying to do the right thing.  It also called to mind Jenifer Estep's YA series about the boarding school.  Imagine how hard it is to fit in when you are dealing, not only with the normal teenage angst, but also some added in powers and issues and friction from other types of witches and other supernaturals?

Sophie was a real seeming character, it was easy to see her as a flesh and blood person.  It was a little harder with the supermodel looking witches who try to get her to join their coven, they seemed a bit more cookie cutter like, but still believable as a clique you might meet in high school.  I am really looking forward to jumping into the next book!