Marathon Crasher: The Life and Times of MERRY LEPPER, the First American Woman to Run a Marathon by David Davis 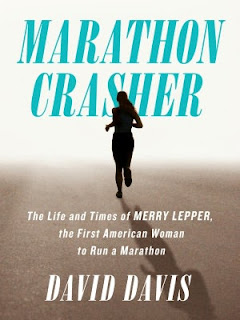 At a time when television was pushing male-dominated sports coverage into living rooms across America, women were struggling just to set foot onto the playing field. Barred from officially registering for long-distance running competitions, some women ran anyway, defying the authorities and the rules. Still, no American woman had ever successfully completed sports' ultimate endurance test: the marathon.
That changed in December of 1963, when Merry Lepper became the first. Leaping out of her hiding place in the bushes at the start of the race, dodging cars and infuriated race officials, Merry Lepper challenged the status quo and defeated it, years before the ban on female competitors would be revoked. This is the story of the arduous journey women distance runners had to endure to reach equality with men, and the story of how one woman overcame tremendous hurdles to fulfill a shared dream, paving the way for generations of female marathon runners to come.
This ebook also includes a 17-page excerpt from Showdown at Shepherd’s Bush, the story of the epic clash at the 1908 Olympic Marathon that jump-started the first marathon mania and heralded the modern age in sports.
My thoughts:
I read this book on NetGalley a couple weekends ago.  The title jumped out at me because I am registered for my first marathon in October, so anything with the word "marathon" in the title grabs me.  In going about our daily lives we often don't think about people who fought to get us the rights we have today. When I was debating whether or not to register for a marathon I never had to factor in if I would be allowed to run in a marathon.  I thought about if I felt I could train and complete that distance, if I would have the time needed to put into training, and how important this goal was for me.  Before 1963 when Merry Lepper ran as a crasher, no woman had completed a marathon.  The reasons given why women were not allowed seem so silly in retrospect, their bodies were too frail to undertake that strain and stress was a leading argument.  So a woman can carry a pregnancy for 9 months and give birth, but is too frail to run 26.2 miles?  Obviously these arguments were put forth by men.

Merry trained with another female friend and they both jumped out of the bushes when the race started and jumped in with the other runners.  Men tried to stop them and tried to get them out of the race, but they kept going.  Unfortunately Merry's friend did not complete the race, a fact that to this day causes her to feel regret, but Merry did.  Her accomplishment barely got her a mention in the news as it was a busy news week.  But today, all the women running can be thankful for her perseverance and dedication to something she felt passionate about.  Merry did not even tell her parents what she planned to do that day, she only said she was going to Hollywood with friends.  The marathon she ran in no longer exists, but the overall number of marathons has increased tremendously.

When I started reading this book I thought it was going to be all about Merry and women's running, but there were long sections about running in general.  One thing I kept thinking as I was reading was that now, in most races I've been in that break down entrants by gender, more women are registering and completing races than men.  Women are making up for lost time and exercising the right they have to use their bodies as they see fit!