Highlander for the Holidays by Janet Chapman 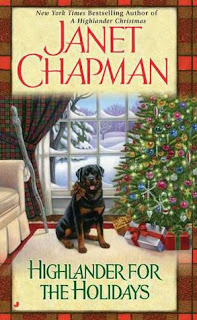 After a brutal attack, Jessie Pringle moved to the small mountain town of Pine Creek, Maine, to start over. But she never expected to meet Ian MacKeage, who had seemingly stepped right out of the Scottish Highlands. As drawn to Ian as he is to her, Jessie finds it more and more difficult to deny her own desires...
Then, on one of her long walks through the wilderness, she meets a kindly hermit who sells her a walking stick-one imbued with a magic that may allow Jessie to finally be rid of the pain of her past, and build a future with Ian.
My thoughts:
I am now starting to get caught up with all the books I read while I wasn't getting around to posting.  They should keep me busy for quite awhile!  I read this one last month and loved it.  I remember quite a few winters ago, long before I had discovered blogging, I read book 2 of Chapman's Highlander series and loved it.  I went back and bought book 1 and then read all the others either then or as they came out.  I love her writing and of course, though strong Highlanders who want to protect the object of their affection, while also being both gentle and passionate, just the right mix for a romance!  I got this book as a swap on Paperbackswap earlier this year.  I have since sent it along to another reader so someone else can enjoy it.

I enjoyed Jessie, I guessed at one of the points from her past that was holding her back from recovering, but I don't think that it detracted from the story at all.  Having her move so many miles from where the attack occurred and putting her in a situation where she got to be strong and self-reliant let her heal in a way I don't think she ever would have had she stayed in Atlanta.  Going someplace new can let you be someone else and shed some of the preconceived notions people who already know you may have.

I must admit I had a bit of trouble placing Ian, figuring out whose son he was as I read the other books so long ago.  i actually decided for the beginning bit that it just didn't matter and then at one point it clicked.  I think even without already knowing this whole clan a reader could pick up the book and jump right in.  The magic jumps out and shows itself pretty well that no one is going to be too thrown off.  I wish I had made the time to read this at Christmas time, but now that the hot weather has hit again maybe it is just as well.  I could have waited and read myself cool!