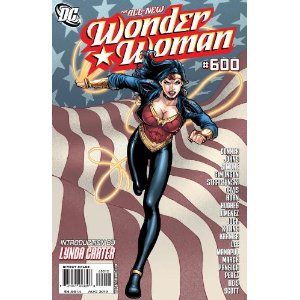 My thoughts:
Last summer Wonder Woman got a face-lift in comic books.  A lot of things are changed up in this comic book and there is a lot of extra content in the issue.  In between each of the short stories are illustrations of Wonder Woman in various versions of her costume.  There are five different short story lines told with the last one being the opening for the new series.  Growing up I thought that Wonder Woman was the only female superhero, but in this issue she fights alongside of a ton of female heroes that I have never heard of.  I do not know if they are made up for this issue or if they were there all along and I  never took the time to seek them out.

In the story at the end that leads into the new series Diana was rescued from her island as an infant before her mother died and was taken underground to be raised by other Amazons.  She is still coming into her powers and seems to be in her late teens or early twenties and is questioning why she must stay hidden and why men are always chasing and trying to kill her.  She meets with the Oracle, who looks like a teenager in fishnet tights, a tight tank top and leather jacket.  The Oracle begins to show her where she came from and tell her details about the past that she does not know.

The beginning of the issue starts with a forward from Lynda Carter who starred as Wonder Woman on TV when she was in her twenties.  I grew up watching the series and playing Wonder Woman with my sister.  Wonder Woman was about more than fighting, she showed and can continue to show women how to be strong and capable in their own lives.

At the end of the issue there is a section from the two artists on their design and storyline.  It was interesting to read how they came to their new vision for the character and how they made this a reboot story, making it so that a rift occurred in the timeline twenty years ago so that Diana would be in the world as we see it now and made her costume more street appropriate.  They wanted to change Wonder Woman from the feel of being an older character like someones mother or grandmother, into a relatible young person today.  I am reading this new series from the beginning so I will be posting my thoughts on each issue as I get to it.  Then I managed to collect a lot of back issues so I have those to go to once I finish the most current ones.
Posted by Jill Buck at 10:13 PM