Gregor the Overlander by Suzanne Collins 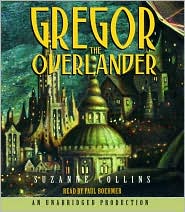 
When Gregor falls through a grate in the laundry room of his apartment building, he hurtles into the dark Underland, where spiders, rats, cockroaches coexist uneasily with humans. This world is on the brink of war, and Gregor's arrival is no accident. A prophecy foretells that Gregor has a role to play in the Underland's uncertain future. Gregor wants no part of it -- until he realizes it's the only way to solve the mystery of his father's disappearance. Reluctantly, Gregor embarks on a dangerous adventure that will change both him and the Underland forever.

My thoughts:
As we were listening to this book I really started to wish that we had started at the beginning of the series.  A lot of the suspense in this one was ruined because, having read books three through five, there weren't too many surprises.  On the first quest that Gregor undertakes the Prophesy of Gray states that only eight will return but instead of wondering who was going to perish on the trip my children were wondering when it was going to happen.  I could hear them in the back saying, "Well we know  ___ is going to die, do you think it will happen now?".  We also had a different perspective on the book.

While the same narrator was doing the reading he was doing some of the voices different than he does in later books.  Ripred sounded totally different.  My husband was along with us for a trip and asked what was wrong with Ripred's voice because it was so noticibly different than later on.  I prefer the later on voice, but I don't know if that is because it is the voice we first heard for him.

I know some readers aren't fans of series, but I like getting to know characters and then seeing them grow and change and I think for young readers they are a great hook to get children interested and invested in reading.  My son checked out Gregor books this week at the library and he is trying to stay ahead of where we are in the book in the car.  In my mind, anything that motivates him to read and have fun with it is a good thing!