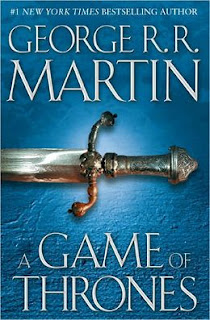 The first volume of A Song of Ice and Fire, the greatest fantasy epic of the modern age. GAME OF THRONES is now a major TV series from HBO, starring Sean Bean.Summers span decades. Winter can last a lifetime. And the struggle for the Iron Throne has begun.As Warden of the north, Lord Eddard Stark counts it a curse when King Robert bestows on him the office of the Hand. His honour weighs him down at court where a true man does what he will, not what he must … and a dead enemy is a thing of beauty.The old gods have no power in the south, Stark’s family is split and there is treachery at court. Worse, the vengeance-mad heir of the deposed Dragon King has grown to maturity in exile in the Free Cities. He claims the Iron Throne.

My thoughts:
I bought the boxed set over a year ago and never got around to reading any of them.  My husband read the whole series and kept urging me to pick them up but, I will admit it, I was scared off by the length.  Don't get me wrong, I read long books all the time, but I wasn't totally convinced that this series was for me and it was hard to get myself to commit to that many pages!  Also, we had already watched Season 1 of the HBO series so I didn't feel all that much pressure to read it as I knew how it had been acted out on screen, even though I  know things are often changed from book to screen.

I finally decided to try it as an audio book.  It took me awhile, but I finished listening to the audio version a couple of weeks ago.  From what I can recall of the series I think they did a very good job adapting it for the screen.  They stayed true to very much of the book.  The biggest difference I noticed was the ages of the characters versus the actors that were chosen to play them on screen.  Most of the major younger character were much younger in the book than what they appeared to be onscreen.  I do think it might have been hard for viewers to see Rob and Daenerys as preteens or young teens versus the older teen to young twenties they appear in the show.  Jon going to the serve the Black Watch before he turns fifteen might have seemed more barbaric.

Another thing I wondered about was the need for odd sounding names.  While some of the characters have common names, many of them have names that are almost common but not quite.  For example Eddard instead of Edward and Catelyn who is known as Cat not Cate.  I think when I watched the show I sort of changed the names around in my head so they sounded more like what I am used to.

I am torn now as to book two.  Will I try to read it when my bedside stack gets smaller or should I check the library for the audio version again and listen to it?  I enjoyed this one, but it was a time commitment even to listen to it and I am not in a hurry to undertake the next one just yet.

More by this Author

George R R Martin's bestselling A Song of Ice and Fire fantasy series has earned him the title of 'the American Tolkien'. The first book of the series has been made into a HBO TV adaptation, A Game of Thrones. He is the author of eight novels, several collections of short stories and numerous screenplays for television drama and feature films. He lives in Santa Fe, New Mexico.
Posted by Jill Buck at 9:53 AM