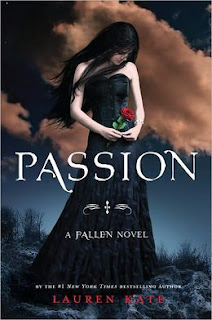 Luce would die for Daniel.
And she has. Over and over again. Throughout time, Luce and Daniel have found each other, only to be painfully torn apart: Luce dead, Daniel left broken and alone. But perhaps it doesn’t need to be that way. . . .
Luce is certain that something—or someone—in a past life can help her in her present one. So she begins the most important journey of this lifetime . . . going back eternities to witness firsthand her romances with Daniel . . . and finally unlock the key to making their love last.
Cam and the legions of angels and Outcasts are desperate to catch Luce, but none are as frantic as Daniel. He chases Luce through their shared pasts, terrified of what might happen if she rewrites history.
Because their romance for the ages could go up in flames . . . forever.
Sweeping across centuries, PASSION is the third novel in the unforgettably epic FALLEN series.

My thoughts:
Daniel brings Luce home to her parents to celebrate Thanksgiving, but when her parents for their after dinner walk, and Luce, her angel friends, her demon friends, two of her Nephilim friends and her best friend from her first boarding school are trying to clean up the blind Outcasts came to take her away.  Instead of going with them or risking them killing any of her friends, she opens an Announcer and travels to her past to see all the details she can't recall of the lives she and Daniel  have shared.  She sees herself in England going up in flames and in Egypt and in China.  She watches both the falling in love of herself and the current manifestation of Daniel, to the demise when she goes up in flames, to the aftermath for all the people who loved her before she died.  She sees Daniel and how he deals with her death and how much it tears him apart each time he loses her.  Each past self teaches her something, but none of them seem to put the whole story together of the why she goes up in flames.  Sometimes it is their first kiss, sometimes they have done more than kiss, sometimes they haven't even touched yet.  Something happens each and every time, but she is still missing an integral piece of the puzzle.

As she travels from Announcer to Announcer and goes further and further into her past she picks up a Gargoyle named Bill who says he is there to help her.  He never lets himself be seen by the angels in any of the lifetimes, but he pulls strings and makes it so she can safely live in each of the times for either a few moments or for days.  Something about him feels wrong, but she is so glad to have someone with her on this journey that she doesn't always see or feel the discrepancy.  He tells her the way to solve her current problem is to kill her soul so she can go back to Daniel in her present and she will be safe.

Daniel meanwhile is racing after her, always arriving just a little bit too late, but also seeing their shared past from a new perspective.  Sometimes he visits his old self, sometimes he does not, but he does take the time to visit the gathering in Heaven when the angels were told they needed to chose a side, either that of Lucifer or that of the Throne and he tells both his old self and all the angels something they need to hear.

Bill has his day towards the end and things are all set up for book four, the final book in the series.