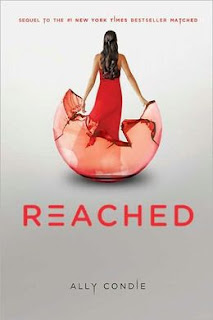 Cassia’s journey began with an error, a momentary glitch in the otherwise perfect façade of the Society. After crossing canyons to break free, she waits, silk and paper smuggled against her skin, ready for the final chapter.
The wait is over.
One young woman has raged against those who threaten to keep away what matters most—family, love, choice. Her quiet revolution is about to explode into full-scale rebellion.
With exquisite prose, the emotionally gripping conclusion to the international–bestselling Matched trilogy returns Cassia, Ky, and Xander to the Society to save the one thing they have been denied for so long, .

My thoughts:
I had really been looking forward to the conclusion of this series.  I wanted to see how things played out.  Would Ky and Cassia run from society?  Was there any chance that Cassia might chose Xander instead of Ky?  How was working for the Rising going to work out for them?  How were they going to be used and for what purposes?  Where was Indie going to fit and and would they find their families?

The chapters alternated between Cassia, Xander and Ky so that the story was told from all of their points of view, but I think I was most focused on Cassia's life and how the other two were playing into hers.  For a large part of the book all three of them are kept apart, by being in different places and districts and they do not have the opportunity to communicate.  Even though the Rising manages to take the Society over, things do not change very much and secrecy is still the norm.

Something that struck me the most was, after the changeover when Cassia manages to organize a Gallery outside on unused barriers for people to showcase the art work they have created on their own.  After years and years of being told that no one could ever do anything new again, that everything creative had already been done and there was nothing to be gained by them recreating the same things over and over again people are finally being give the chance to make things and write things and sing things and many of them jump at the chance to gather and showcase their work.  The coming together once they have the choice and the opportunity shows that even though their creativity has been suppressed all this time, it was always there.  It didn't matter to them if they were doing something that had already been done before or had been done better, it mattered they they were able to do it themselves and to find enjoyment in doing it.

Another large issue in the book were the plagues. For many years the Society was using the water of their enemy to poison them, having created a cure for the plague fore themselves, but releasing something like that out into the environment was riskier than they anticipated and the repercussions of it was much more than they predicted.  We do this all the time, let substances go into the ground or into groundwater without having a clear understanding of what might happen down the line which we see again and again.

I wasn't sure how I would feel about the end of the series, but I was satisfied with the ending and the way it wrapped things up.  It wasn't all tied up with a pretty bow, but you can see the direction the three of them are moving in and their society as a whole and hope that things are track for a better future for all.