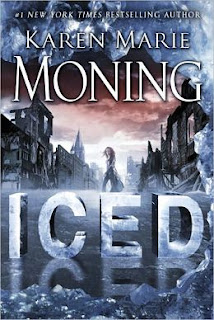 Dani “Mega” O’Malley plays by her own set of rules — and in a world overrun by Dark Fae, her biggest rule is: Do what it takes to survive. Possessing rare talents and the all-powerful Sword of Light, Dani is more than equipped for the task. In fact, she’s one of the few humans who can defend themselves against the Unseelie. But now, amid the pandemonium, her greatest gifts have turned into serious liabilities.

Dani’s ex–best friend, MacKayla Lane, wants her dead, the terrifying Unseelie princes have put a price on her head, and Inspector Jayne, the head of the police force, is after her sword and will stop at nothing to get it. What’s more, people are being mysteriously frozen to death all over the city, encased on the spot in sub-zero, icy tableaux.
When Dublin’s most seductive nightclub gets blanketed in hoarfrost, Dani finds herself at the mercy of Ryodan, the club’s ruthless, immortal owner. He needs her quick wit and exceptional skill to figure out what’s freezing Fae and humans dead in their tracks — and Ryodan will do anything to ensure her compliance.
Dodging bullets, fangs, and fists, Dani must strike treacherous bargains and make desperate alliances to save her beloved Dublin — before everything and everyone in it gets iced.

My thoughts:
Somehow I missed a lot of the hype surrounding this book.  I think I thought when the Fever series ended that Moning was done with this world of Dark and Light Fae and the missing walls that kept them separate from our human society.  Thinking back I know I did see an interview saying that the MacKelters were going to be crossing over more with the storyline, but I thought that sending Christian into the Silvers and performing the Druid rituals to keep the walls closed were the end of it.  Therefore I was happy to get a chance to visit this world again.

I always liked Dani and wondered a bit about what made her tick.  I did find myself missing Mac a bit, wondering what she was thinking and doing and if she really did hate Dani after finding out that she was responsible for the murder of her sister or if that was all in Dani's head, if she had blown things out of proportion.  I  kept waiting for a showdown between the two of them to see if her fear was true or not.

You can tell that Dani is young in her thinking, even though she is gifted with special powers and is a deadly hunter, she misses a lot of what is going on around her.  I did not like the way both Ryodan and Christian treated her like she belonged to them and how they cast her in such a sexual light.  Yes the world is a whole new and pretty horrible place, and Dani never had the type of childhood one would have wished for her, but it felt wrong and creepy sometimes when the two older men were with her.  Christian and all his thoughts about waiting for her to be old enough just felt a bit icky, but I think it was also meant to show us how much the Unseelie part of him is taking over, how hard he has to work to maintain any of his humanity underneath the changing skin and eyes and more.  Who would we be underneath without society and its constraints to keep us in contact with our conscience?  How much harder would it be to maintain acceptable conventions if half of you had a whole different sent of beliefs?

I must admit, I miss Christian as he was before he was lost in the Silvers and saved by eating Unseelie flesh.  I was hoping he would  be like his uncles and that he might even spin off into his own storyline more similar to the Highlander stories Moning started with.  Don't get me wrong, I enjoy these, but those beginning books still hold a place in my heart as some of my favorites!