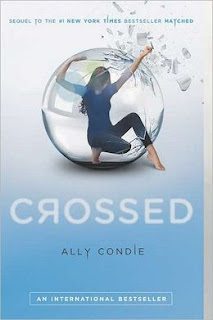 "I couldn't change myself. This epiphany led me to the realization that I didn't love easily, but when I did, I loved with all of myself and I loved completely." The lynchpin novel of Ally Condie's Matched trilogy finds Cassia in the dangerous Outer Provinces in full pursuit of her beloved Ky. Fortunately, he is at least temporarily safe, but rapidly evolving developments offer her little opportunity for tranquility. With each passing event, threats and potential betrayals seem closer; unless Ally acts, her future will be forever locked closed.

My thoughts:
Cassia has managed to get herself assigned to a work detail nearer to where Ky is in her quest to get to him.  The chapters still alternate between Cassia, Xander and Ky, tracking where they are and what they are doing.  Xander gets less of a focus in this book than in the other two, as we are most focused on Cassia's plan to find Ky.

In this book we get to find out a bit more about how the Society works, how the red, blue and green pill tablets work and what is beyond the walls of the Society.  Cassia is torn between Xander, her best friend from childhood and her Match for marriage by the Society and Ky, a boy who moved into their district as a child to take the place of his cousin who died in an attack from an Aberration but who is classed as an Anomaly due to actions made by his parents and will never be given a Match or a high job in Society.  In the first book Cassia and Xander went to their Matching ceremony and were given each other as Matches, but when Cassia later views her microcard both Xander and Ky show up on it causing her to wonder about them both.  For years she has chafed a bit at the rules placed upon them by society and now she does so even more.  Especially after Ky is taken away.

Working in the work camps is a punishment for infractions and comes with the likely penalty that one will die before making it back into society.  Cassia takes this risk to find Ky and ends up on  a journey through  the desert away from all she has ever known and finding out more about the Pilot she has heard whispers of for years.

In the desert she learns about people who have lived outside of society and how they have survived and lived.  She meets people who lived in different districts and finds out about thwarted love, sees firsthand the destruction the Society deals out to both human and natural elements who live outside their walls, and finds out that there is a Rising movement who wants to take over .  Again Cassia is torn between people and actions.  This books sets things up very well for the last installment in the series.