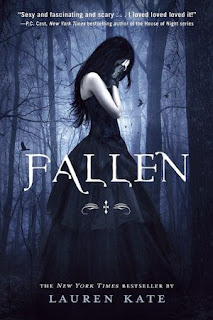 There's something achingly familiar about Daniel Grigori.
Mysterious and aloof, he captures Luce Price's attention from the moment she sees him on her first day at the Sword & Cross boarding school in sultry Savannah, Georgia. He's the one bright spot in a place where cell phones are forbidden, the other students are all screw-ups, and watch every move.
Even though Daniel wants nothing to do with Luce—and goes out of his way to make that very clear—she can't let it go. Drawn to him like a moth to a flame, she has to find out what Daniel is so desperate to keep secret . . . even if it kills her.
Dangerously exciting and darkly romantic, Fallen is a page turning thriller and the ultimate love story.

My thoughts:
I really enjoyed reading this book, but I put off reviewing it for so long that the edges of this story have blended for me with the rest of the series a bit.  Luce has been sent to Sword and Cross because a boy she was with died under suspicious circumstances and she could no longer stay at Dover, her old private school.  This school has a uniform of black clothing and some unusual students.  As soon as she sees Daniel she experiences a sense of deju vu, but he flips her off and makes it clear he is uninterested.  Luce has some trouble fitting in with the other students, but does manage to become good friends with Penn, an orphan whose father was once the caretaker and has been allowed to stay.

One thing Luce has kept secret for years are the shadows she sees following her around that no one else seems to be aware of.  The hover overhead and seem to be everywhere.  She has seen them for years but, after her childhood when no one else saw them or knew what she was talking about, she started to pretend they were not there.  She sees them more and more at this school as she goes about trying to figure out what it is about Daniel that keeps drawing her in.  Along with Daniel she meets Roland, Molly, Cam, Arriane and Annabel who seem to be a group, but not.

Each time she meets up with Daniel something clicks into place until she finds out a bit more about the big picture.  I found Daniel and his aloofness a bit off putting.  I wondered why she bothered to keep trying and if he truly cared about her at all, but things became more clear as I read and especially as the rest of their story unfolds over three more books.