The Alphabet Keeper by Mary Murphy 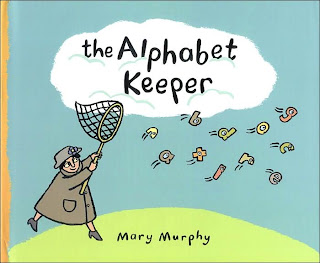 Overview
The Alphabet Keeper keeps all the letters caged in the dark. But one day they escape while she's cleaning their cage–and then there is no stopping them! The clever letters are on the loose, rearranging themselves at every turn. With a few quick moves, the Alphabet Keeper's hat becomes a cat. A bus turns into a bush. A rock changes into a rocket. And the flyaway alphabet is on its way to a final farewell!

Author Biography:
Mary Murphy is the author and illustrator of several picture books. This is her first picture book for Knopf.

My thoughts:
This was a fun book we borrowed from the library this week.  It a good book for the early grades.  I thought it was just going to be an alphabet book when I borrowed it, but it is something more.  The alphabet keeper accidentally lets her letters out of their dark cage and then tries to catch them again.  Each time she is close to catching them they change a letter in the word of what she is using or what they are in and then she is foiled.  A boat deck becomes a duck, a bus becomes a bush, loud letters become a cloud and a rock becomes a rocket.  It is fun for readers who are in the early grades because they can figure out how to the letter swapping, adding or subtracting makes one thing another.
Details
Pub. Date: March 2003
Publisher: Random House Children's Books
Format: Hardcover , 32pp
Age Range: 5 to 8
Series: The Flyaway Alphabet Ser.
ISBN-13: 9780375823473
ISBN: 0375823476