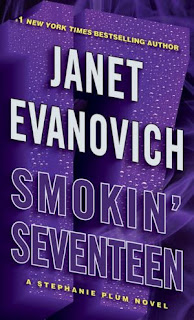 Where there’s smoke there’s fire, and no one knows this better than New Jersey bounty hunter Stephanie Plum.

Dead bodies are showing up in shallow graves on the empty construction lot of Vincent Plum Bail Bonds. No one is sure who the killer is, or why the victims have been offed, but what is clear is that Stephanie’s name is on the killer’s list. Short on time to find the murderer, Stephanie is also under pressure from family and friends to choose between her on-again-off-again boyfriend, Trenton cop Joe Morelli, and the bad boy in her life, security expert Ranger. Stephanie’s mom wants her to dump them both for a former high school football star who’s just returned to town. Stephanie’s sidekick, Lula, suggests a red-hot boudoir “bake-off.” And Joe’s old-world grandmother gives Stephanie “the eye,” which may mean that it’s time to get out of town.

With a cold-blooded killer after her, a handful of hot men, and a capture list that includes a dancing bear and a senior citizen vampire, Stephanie’s life looks like it’s about to go up in smoke.

My thoughts:
I still like to read this series, but they are starting to seem very similar.  I have a few friends who have decided they are done with picking up the Stephanie Plum books as they all seem the same.  She will have trouble deciding which man in her life she wants to be with, her car will catch fire or be destroyed, she will have trouble catching her bounty hunter skips, and her mother will lament that everyone else's daughter is married already and giving her grandchildren.  That said, it is a fun escape and a quick read so I don't see myself giving up anytime soon.  I know who I would pick out of Ranger and Morelli and I wonder if she will ever make choice or if that would end the series.  Would it take the fun and tension out of it if she made a choice?

Because I waited so long to get around to this one, I know that number eighteen is already out and I already have a tentative plan in place to borrow it from a friend to read, so it is nice that I don't need to wait to see who Stephanie goes on vacation with and where they go.