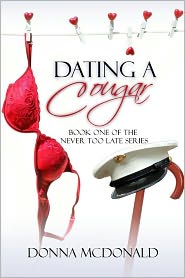 Overview
After several decades of looking for true love and never finding it, aging model and lingerie designer, Alexa Ranger, has finally given up the search. A couple years ago, she got tired of the game completely and just stopped dating. Now friends and family keep her mostly content, so it’s shocking at 50 yrs old to find herself suddenly wanting a sex life again. It’s even more shocking to be attracted to a much younger man this time. She definitely thinks Casey Carter is sexy, but not handling her own age well, Alexa just can’t get passed their twelve year age difference to even consider a fling. Not that it matters anyway, anything resembling a normal dating relationship is totally out of the question because Casey is related to and living with her daughter’s boyfriend. The very last thing Alexa needs is yet another talk-show worthy drama in her already complicated life, no matter how amazing Casey’s kisses make her feel.


For a couple of years, 38 yr old, medically retired Marine, Casey Carter, believed his military injury had made him impotent. Having lost his wife to cancer, he hadn’t exactly been worried about the problem. Most days walking with cane was enough challenge for him. But now that he was ready to move on with his life, he had become more worried when none of the females his cousin brought around held any interest for him. So the last woman in the world he expected to start his engine revving again was the mother of his cousin's girlfriend. Even at fifty, Alexa is drop-dead gorgeous, and his libido certainly keeps reminding him she is the first woman he has wanted in a long, long time. Ironically, the more Casey gets to know and like Alexa, he finds out desiring the older woman is the easiest part. Jaded and cynical about love, Alexa is a difficult woman to convince of anything, but her kisses are all the proof he needs that they belong together. The former Marine decides his next mission is figuring out how to fit himself into her life.

My thoughts:
So I had a picture in my mind of what a cougar was, not just the actual animal cougar, but the women who are now referred to as cougars.  I saw an older woman, not sure how old but older than your usual bar crowd I guess, who was looking for a younger man.  And by looking, I mean actively seeking someone to date who is significantly younger, I guess I saw someone who was a predator like the animal, wearing tight clothes to lure in some young meat.  That sounds terrible, but that is what always came to mind with the word cougar.  Also, wearing animal print was up there on my list.  This book turned that notion around.  Yes there was an age difference, but Alexa was not out there looking to meet a younger man, she wasn't even looking to meet anyone, it simply happened and then the age difference  came front and center and had to be dealt with.  I read this book as a free downloads and I wasn't sure if it would be any good since I had never heard of it.  I was pleasantly surprised to find that I really liked the characters and came to care about them.  I am even considering looking into reading more in the series.

I read this book as a free e-book on my Ipod.  When I just checked now it is still listed as a free book.  Since my Ipod is still pretty new I've been trying out different features and wanted to see what it would be like to read a book on it.  I love that it tells me what page I am on of how many and also that it says how many more pages are still to go in my current chapter.  I love that feature because if it is less than ten or twenty I will finish the chapter before stopping, but if it is more like forty I will just bookmark it.  The tiny screen isn't the best place to read, but being back lite really helped while we didn't have power, except I used up the battery and then  had to wait to charge it!

Meet The Author
Donna McDonald has been a writer all her life and managed to complete her first novel in August of 2010. Her idea of success is to be on an airplane and see a fellow passenger reading one of her stories. If the person is laughing or smiling, she will consider it a bonus. She lives in Lexington, Kentucky with her fiancée, Bruce. Her work history covers everything from housekeeper to business owner to college English instructor. It also includes an eighteen year stint as a technical writer, publications planner, and information architect in the corporate world. Her current career goal is to be a prolific, multi-published author for the rest of her life and write stories readers will love to read. She thinks a little travel and adventure would be nice, too.