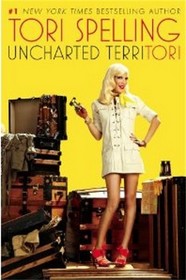 Synopsis from Paperbackswap.com:
Welcome to Los Angeles, birthplace and residence of Tori Spelling. — It’s not every Hollywood starlet whose name greets you on a Virgin Airways flight into la-la land. But Tori Spelling has come to accept that her life is a spectacle. Her name is her brand, and business is booming. Too bad when your job is to be yourself, you can't exactly take a break.


Tori finally has everything she thought she wanted—a loving family and a successful career—but trying to live a normal life in Hollywood is a little weird. With the irresistible wit, attitude, and humor that fans have come to love, the New York Times bestselling author of sTORI telling and Mommywood is back with more hilarious, heartwarming, and candid stories of juggling work, marriage, motherhood, and reality television cameras.

Tori comes clean about doing her time on jury duty, stalking herself on Twitter, discovering her former 90210 castmates’ "I Hate Tori" club, contracting swine flu, and contacting Farrah Fawcett from the dead. Like many mothers, she struggles to find balance (Stars, they’re just like us!)—only most women don’t have to battle it out with paparazzi at the grocery store. She talks openly about the darker side of life in the spotlight: media scrutiny over her weight and her marriage to Dean McDermott, her controversial relationship with Dean’s ex-wife, and her unfolding reconciliation with her mother.

Having it all isn’t always easy—especially when you’re a perfectionist—but with the help of her unconventional family and friends, an underwear-clad spiritual cleansing or two, and faith in herself, she’s learning to find her happy ending. Because when you’re Tori Spelling, every day brings uncharted terriTORI

My thoughts:
I have been wanting to read this one for awhile now and last week I bought it used on Amazon.  I read both of her other two books and loved them from the start, this one I was a bit slower to warm up to.  It did kick in and I was hooked, but not right from the start.  I can't identify what it was about the start that didn't catch me, it could have just been built up anticipation since I thought the others were so funny.

Tori admits to being a workaholic who has trouble ceding control to others.  I think it is easy to get caught in the trap that we should be able to do everything and hard to accept that the way someone else might do something might not be the way we would have.  But in doing everything by yourself you create a lot of extra stress.  I can totally identify with this, but without all of Tori's perfectionist issues as well.  I know I am not getting it all done and not getting it all done perfectly, but it is still easier to do things myself than try to explain how I want them done.

Tori has been having headaches for ten years now and has gone through a lot of doctors and other types of practitioners in her quest to be cured.  She has another visit with the the voodoo practitioner she met with in one of her other books and this time is even more bizarre than the chicken being killed in front of her.  She over thinks a lot of things in the same way so many of us do, but unlike the rest of us, she admits it and admits she is trying to work on it.

I'd like to say she is just like anyone else, and in some ways she is, she worries about her family and her health and what people are thinking about her, but she lives in a world most of us can't imagine.  Last week I forgot to put make-up on before going to work one morning.  I did two loads of laundry and got the kids ready and walked out the door without it.  In the grand scheme of things it really didn't matter, it bothered me and made me self-conscious and I did consider coming home to remedy the situation but then I would have been late, but it wasn't like there was anyone hanging out to take a picture of me or I had to fear a headline about how I must be sick because I was out looking haggard.  I can't imagine the extra stress of worrying that complete strangers are judging you.