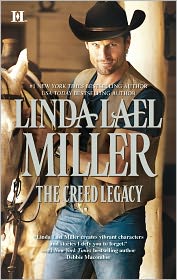 Rough-and-tumble rodeo cowboy Brody Creed likes life on the move. Until a chance encounter with his long-estranged twin brother brings him "home" for the first time in years. Suddenly Brody is in Creed territory—at thirty-three, he's a restless bad boy among family with deep ties to the land and each other. And a secret past haunts him as he tries to make plans for his future.

Carolyn Simmons is looking for Mr. Right in Lonesome Bend, as the ticktock of her biological clock gets ever louder. Then she falls for gorgeous Brody Creed, the opposite of everything she wants. Until lassoing his wild heart becomes everything both of them need.

My thoughts:
I started this book in August and forgot to take it with me when we went on vacation, then one thing after another got in the way of me finishing it.  Over the weekend we lost power for four days which gave me time to read, with flashlights or candles or book lights, but time without other distractions.  The first night this is the book I decided to pick up and finish.

Earlier this year I read the first two books in this segment of the Creed story.  This time I was finding out about the bad boy in the family who turned out to be not such a bad boy after all.  Both Carolyn and Brody are carrying around  a lot of baggage from their pasts and it takes a lot of work for them to move past the hurts and insecurities from the past to build a future.  I think part of what allowed me to put this book down earlier this summer was that I got a bit frustrated with the two of them for the roadblocks they were allowing to stand in the way of their happiness, but many of us do that by not allowing ourselves to trust or to believe, so eventually I worked my way back to the book and saw the couple through to their happy ending.  It was just right for a night of no lights or head, reading by candlelight wrapped up in blankets.