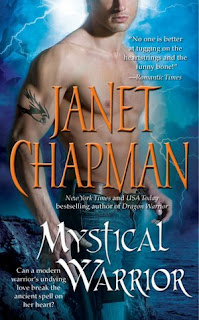 Trace Huntsman’s peaceful life has headed to hell in a hand-basket ever since stunningly beautiful Fiona Gregor moved into the vacant apartment above his house. Kidnapped centuries earlier and transformed into a red-tail hawk, Fiona is human once more and must learn how to be a modern woman. But damned if Trace is going to be the one to teach her. Not when her mere presence ignites a fiery passion deep within his cautious heart.

Fiona longs to overcome the painful memories of her tragic past—to let down her guard and become a mother again. But so far her handsome landlord is not exactly thrilled with the stray animals—and suitors—that keep following her home. When the wizard Maximilian Oceanus shows up, Trace reaches the end of his rope. Weird things happen when Mac is around—raging storms, snarling demons—but this time, Midnight Bay is at the center of a fierce battle, and Fiona is the primary target. Only Trace can save her, but first, the lovers must set aside their fears . . . and open up their hearts.

My thoughts:
This is another book that has been sitting in my shelf since this summer.  It was supposed to go to the beach with me and it didn't make it into the bag.  Why it then took three more months to pick it up I really couldn't say.  I loved Chapman's Highlander series, this series I like okay but not as much as the other one.  I can't quite say why but the first two books in the series really grabbed me and made me love the characters.

This was a fun and action filled read.  I like that the couple is given a lot of time to get to know each other and to get over their differences, that they aren't just madly in love from the get go, but take time like any flesh and blood couple would in finding their way to each other and into each others hearts.  I must admit that I only have a foggy recall of Fiona's time as a red tailed hawk.  I remembered she was one, but I couldn't remember why exactly.  Seeing Fiona come to grips with her past and also embrace the present was nice, she grew and changed and found courage when she thought she didn't have any.  Trace went through some of the same changes, he had things in his past that he needed to find the courage to work past.  Together they fought through supernatural obstactles as well as mental ones to become stronger people.
Product Details