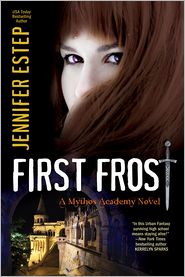 
I am Gwen Frost, and I have a Gypsy gift. It's called psychometry - that's a fancy way of saying that I see images in my head and get flashes of other people's memories off almost everything I touch, even guys.


My gift makes me kind of nosy. Okay, okay, maybe a lot nosy--to the point of obsession sometimes. I want to know everything about everyone around me. But even I don't want to know the secrets my friend Paige is hiding or the terrible loss that will send me to a new school - Mythos Academy, where the teachers aren't preparing us for the SATs, but to battle Reapers of Chaos. Now I have no friends and no idea how my gift fits in with all these warrior whiz kids. The only thing I do know is that my life is never, ever going to be the same. . .

"Touch of Frost is an intriguing start to an exciting new series!" -Award-winning author Jeri Smith-Ready

Jennifer is a member of Romance Writers of America, Science Fiction and Fantasy Writers of America, and other writing groups. Jennifer's books have been featured in Cosmopolitan, Entertainment Weekly, Southern Living, and a variety of other publications.

My thoughts:
This was the first book I read on my Kindle last weekend.  I loved how fast it read.  Gwen Frost reminds me a lot of Gin from the Elemental Assassins series.  It seemed like it might be same world just featuring someone else, but I could be wrong.  I really wanted to read this over the summer when it was published, but better late than never and now I think the second book in the Mythos Academy Series will be out soon so it is almost better, I won't have enough time to forget details before starting the next one.

Gwen, her mother and her grandmother all share some special powers that Gwen believes were passed down to them from witch ancestors.  After a few problems and incidents Gwen discovers that she is going to be going to a special school for people like her who have special powers.  The school reminded me of the camp that Percy went to in the Percy Jackson series, maybe because there was a Spartan there and PE class is training in weapons and sword play.

I would like to see where this series goes, as well as go back to Gin's story and read the two books I haven't gotten to yet.  I have them on the shelf but somehow haven't made the time to dive into them.  This book reminded me about how much I enjoy that series.
Details
•Pub. Date: July 2011
•Publisher: Kensington Publishing Corporation
•Age Range: Young Adult
•Series: Mythos Academy Series
•ISBN-13: 9780758275073
•ISBN: 0758275072
Posted by Jill Buck at 8:50 PM