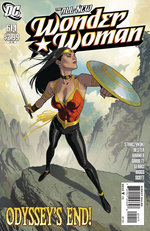 all-new Wonder Woman reaches the end of her epic "Odyssey" and comes face-to-face with the malevolent force behind it all! But the only way to defeat her nemesis may be to become her – giving her own powers over to an all-consuming hatred for life on Earth! Is Diana strong enough to control a force that seeks vengeance on all mankind, or will the warrior within her condemn her to a life of eternal bloodshed?

My thoughts:
So Diana has lost her fractured self and has both her old and new memories, I think at least, now she is able to go home and see the mother she never had a chance to know in this storyline while finding the power to overcome the curse put upon her by Nemesis.  Things were tied up but also opened up for the new start to the series this month.  I looked up the date for the new issue and it came out on September 21.  As I am writing this it is on a couple days later but I don't have the issue yet.  Chances are good that I will have it and can set up my post for tomorrow, but it depends how busy I get with other things.  I am glad that I took the time tonight to read through all the issues I had waiting for me and sorry that I didn't read them sooner.  Sometimes it is a lot easier to read a book than a comic because I feel like I need to be careful with the pages and not mess them up, not that I think they will be worth tons of money at any point in time, just because that is what people do!