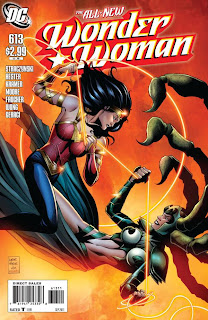 
The mega-opus "Odyssey" proved too big, it needed two extra issues to tell J. Michael Straczynski and Phil Hester's full story! It's classic Wonder Woman versus the new one! Even if she wins, she loses!

My thoughts:
So Nemesis has taken Wonder Woman's form by taking her essense with her blade, but Clotho's waeving saved a sliver of Diana who became the Diana we've been following and that is how there are two differnet realities, or more, or Wonder Woman's life and why Clotho got to be such an old woman.  So a classic fight of good against evil in moral terms comes to pass.  I am going to be sad to see this series or story line arc I guess end with the next issue.  A new story line started or is starting in September and I am not even sure if we have an issue of it yet.  I really felt like this one was starting to go off course and I am glad they were able to bring it all around so that the earlier elements made sense with where it ended up.  Now to go and read the conclusion!
Posted by Jill Buck at 6:00 PM