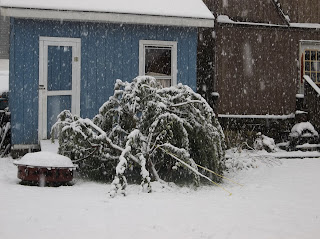 I had a ton of cute Halloween shots I was planning to use today, but then the weather forecast changed to snow, snow in October!  So I made a change.  The first picture is our poor apple tree.  In August Hurricane Irene knocked it with drenched soil combined with high winds.  We used stakes and had it upright until today.  I guess the weight of the snow was too much for it.  I'm not sure if it is going to make it or not now.  We planted it the month we moved into our house six years ago.  Hopefully we can save it! 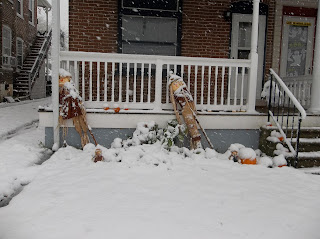 Scarecrows and pumpkins and snow!  This doesn't usually happen unless I am really late at getting the decoration back in the house.  The scarecrows look like they were blown astray a bit too! 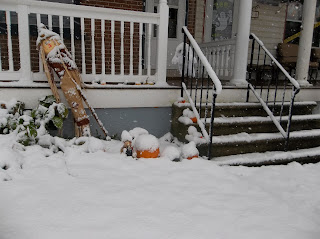 Today was supposed to be pumpkin carving day.  The ones we did at church earlier this month all rotted already so we had planned to do some more.  I'm not sure that is going to happen anymore!
In other news today was my third 5K.  I started running in July and have been doing a race a month to keep myself from having the option to slack off or quit.  This was the first time I've ever run outside in the cold or in the snow.  It wasn't as bad as I thought it would be and I made my best time so far.  Granted it was a very level course, but it was still an accomplishment as I didn't take any walking breaks this time.  I don't take breaks on the treadmill, but being outside is always a bit different.
Posted by Jill Buck at 1:38 PM